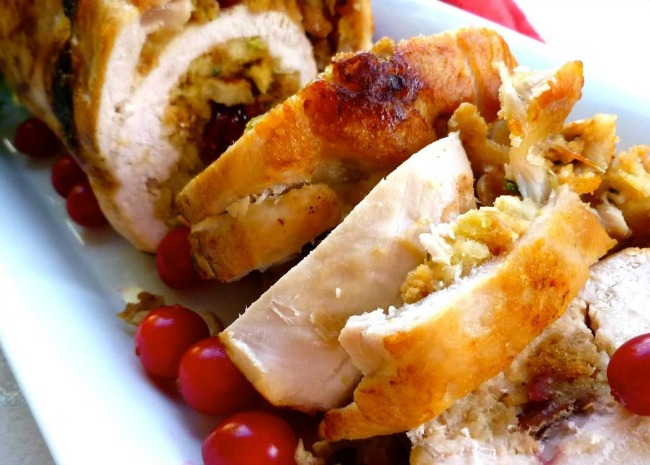 Preparing a traditional Thanksgiving dinner that's lower in fat and calories but still thrills the crowd isn't hard. All it takes is a few ingredient substitutions and some clever fat-busting techniques. Let's take a look at how to make a delicious, healthier Thanksgiving meal.

If you're hosting a small gathering, buy a turkey breast rather than the whole bird, as breast meat is lower in calories than dark meat.

If you do buy a whole turkey, avoid "self-basting" turkeys, as they often contain added fat. And, it goes without saying, stay away from the deep fryer this year, and roast or smoke the turkey. Stuff the turkey cavity with whole or halved onions, halved lemons or apples, and sprigs of fresh herbs such as sage, marjoram, thyme, and/or rosemary. Rather than rubbing the skin with butter or oil, spray it with an oil spray and season it with salt and pepper.

Gravy is one of the biggest calorie culprits on the table. Use vegetable oil rather than turkey drippings when making the gravy -- it's still fat, but vegetable oil is lower in saturated fat and is cholesterol-free.

If you use turkey drippings to add flavor, use a gravy separator. Pour the gravy into a separator and allow it to sit for a few minutes. Some of the fat in the gravy will rise to the top of the glass where you can skim it off easily. Better yet, make a low-fat broth-based gravy or a vegetarian gravy instead.

Instead of loading up your mashed potatoes with lots of butter and cream, add some of the starchy water you used to boil the potatoes. The starchy water will give your mashers a low-cal creamy texture and help cut back on fat.

You can also add turkey or chicken broth, evaporated skim milk, or fat-free sour cream to your mashed potatoes. For extra flavor, stir in roasted garlic and herbs. For added nutrition, add pureed cooked cauliflower, parsnips, or turnips -- or replace the potatoes entirely with Mashed Parsnips or Mashed Turnips.

Most of the fat in a pie comes from the crust. Try a crust-free pumpkin pie recipe or a reduced-fat graham cracker crust.

ARE YOU STRUGGLING TO REACH YOUR FITNESS GOALS?